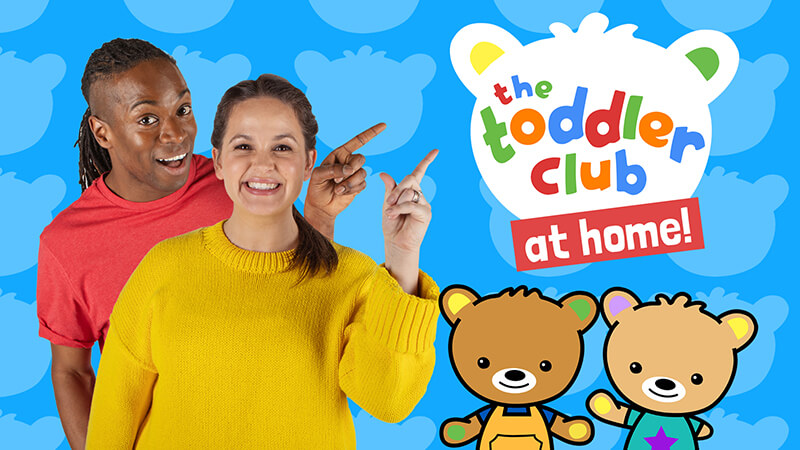 Queen of the Castle Giovanna Fletcher is putting aside her crown and reuniting with Nigel Clarke for a brand-new spin-off of their hit show The Baby Club, in The Toddler Club at Home (20 x 10 mins), coming to CBeebies in January.

A huge success on CBeebies, The Baby Club brings activities enjoyed in parent and baby groups around the country directly into viewers’ homes.  Rooted in academic research, the series recognises the importance of parent and baby attachment to a child’s development.

Now, The Toddler Club at Home is set to do the same for a slightly older age group.  In each episode, “Mumma Gi” and Nigel alternately welcome viewers into their respective homes where they sing, dance, act out stories and encourage viewers to join in with them. Toddlers and their grown-ups appear in their own homes too, having sent into the programme clips of them playing along and having fun together.

From ways to explore numbers, shapes and patterns, to helping your child safely explore their individuality, Nigel and Giovanna show how to get the most out of the everyday activities and challenges that parents and toddlers face at home.  They are ably assisted by new soft-toy characters the Toddler Twins – Benjee Bear and Bailee Bear – the latter of whom has partial limb loss and is missing her lower left arm.

Quote from Giovanna: “As a mum of three lively young boys, I'm all too aware of the challenges facing parents at home and the importance of parent to toddler contact and play.  While families are still unable to visit toddler groups in person, I'm hugely excited to share The Toddler Club At Home with everyone so that they can join in, in the comfort of their own homes.”

Quote from Nigel: “We’re passionate about helping everyone feel as included in the series as possible, so it’s really important we feature a range of diversity in our characters and contributors.  It’s a joy to see everyone enjoying themselves and learning from our content.”

Quote from Jon Hancock (Exec Producer of Three Arrows Media): “We are thrilled to welcome Giovanna and Nigel back to CBeebies to support the next stage of child development in The Toddler Club at Home,” says Jon.  “This last year has shown that it has never been more important to support parents around the country who need a trusted source of encouragement, advice and entertainment, especially as they navigate the sometimes turbulent toddler years!”

Mum of three and recent winner of I’m a Celebrity Get Me Out of Here, Giovanna Fletcher is a presenter, actress and best-selling author.  Her Sunday Times No.1 best-selling book “Happy Mum, Happy Baby”, has led to a hugely successful podcast, featuring conversations with high-profile parents including the Duchess of Cambridge.

Dad of two Nigel Clarke is a prolific TV presenter and stage performer.  He is an accredited Peep baby group facilitator and is passionate about parents and babies attending baby groups and spending quality time together.

The Baby Club is a co-production between Three Arrows Media, Tiny House Productions and CMP Productions.

Part of Wonderborn Studios, Three Arrows Media is a full-service production company based in Manchester, England.  The company was founded in 2015 by Jon Hancock and David Hallam – Creative Execs with over 45 years experience between them working at BBC Children’s and for major indies such as Endemol and Zodiak Kids.  Three Arrows are the creators and producers of the international award-winning Treasure Champs.  They also co-produce the hit series The Baby Club (CBeebies) and Andy and the Band (CBBC/CBeebies).www.threearrowsmedia.com

Tiny House Productions is a boutique Production company, producing high quality content for the major channels. Emma Hyman, co-creator of The Baby Club, started the company in 2018 and has since gone on to create and produce CITV’s Don’t Unleash The Beast.

Christopher Pilkington, co-creator of The Baby Club, set up CMP Productions after spending many years as Head of Kids and Teens at Endemol. Christopher has worked on many much-loved TV series from S Club 7 to I Can Cook, Totally Frank for C4 and Skillz for CITV. Christopher also writes and directs Children’s live shows for Butlins.