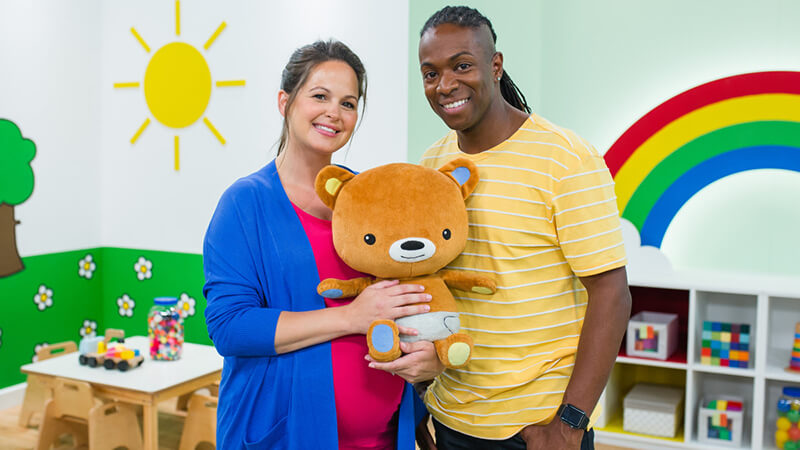 The Baby Club is designed to develop parent-baby attachment and model activities which stimulate early years literacy and language development.

Rockpool Licensing has been named the licensing agency for the CBeebies’ commissioned series, The Baby Club.

Produced by Three Arrows Media in association with Tiny House Productions and CMP Productions, the show replicates the activities of a community parent and baby group.

It then encourages viewers to join in at home.

Grounded in academic research, the format and content of The Baby Club is designed to develop parent-baby attachment and model activities which stimulate early years literacy and language development.

Both presenters have substantial fanbases and profiles on screen and off and will be major participants in the BBC launch PR campaign, set to kick-off later this year.

The Baby Club also features the characters Big Bear and Baby Bear who replicate the parent-baby relationship on screen in books which are read by the presenters.

Baby Bear also joins Giovanna and Nigel as a cuddly toy – partaking in all the activities and songs that the group performs.

The Baby Club will debut on CBeebies in Q1 2019 and will air to work around the busy routines of parents and careers of babies aged six months and up. It will be available on the BBC’s iPlayer.

this will mark the first dual audience targeted show for CBeebies and has strong backing from the BBC evidenced by their commission of a second season prior to broadcast and two pilot parent-facing podcasts to accompany the brand.

Jon Hancock, executive producer from Three Arrows, said: “The Baby Club was not only enormous fun to make, but it’s a much-needed brand supporting and equipping parents at what is an incredibly challenging and important time in their baby’s lives.”

“This fresh and unique opportunity for consumer products is substantial and two-fold; adult-targeted for parents and carers and, of course, the very many partnership opportunities for babies themselves. “

Rockpool will be introducing The Baby Club to the licensing community at London and Nuremberg Toy Fairs and Spring Fair in early 2019.